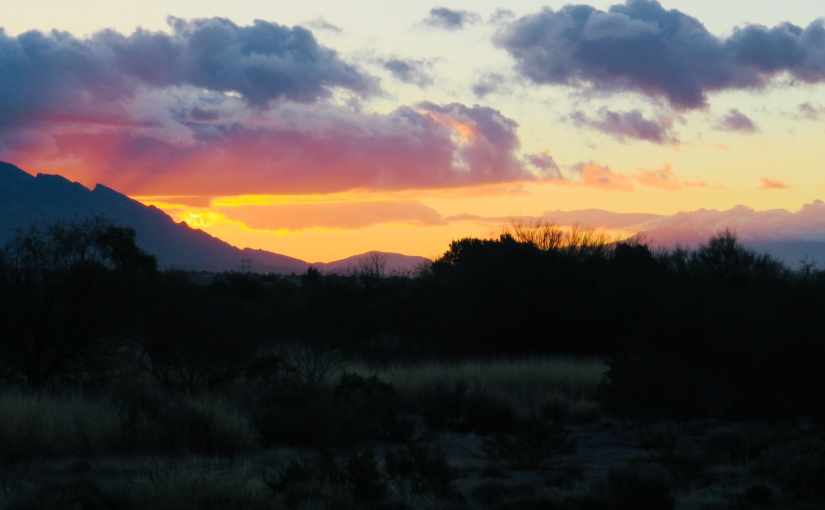 I met her while walking along the levee and under a bridge over the Santa Cruz River outside Tucson, Arizona. She was riding a bike, coming toward me, and yelling at someone. After a few moments, I realized she was yelling at me. I knew I had done nothing wrong, that I was on public property, getting fresh air, and communing with God on a very pleasant desert morning.

It soon became clear that this poor woman was not in full possession of her senses. She was hurling hateful invectives at me for no apparent reason, and it quite stunned me.  Was she suffering from mental illness?  That seemed to be a likely contributor to her state, but I questioned whether that alone could explain the extreme vitriol she expressed in her curses and vile speech.

Was she under the influence of mind-altering drugs? This was possible as well, and although I have very little experience communicating with substance abusers, I’m certain it is a terrible bondage to be under.

Was she overreacting in panic to the current Coronavirus pandemic?  Or did she feel threatened by the difference in our skin color?  Between her curses, I could make out accusations of white supremacy as well as allusions to the current state of things in the world, and that blame for it was to be allocated to certain groups of people that probably didn’t include herself.

But what especially troubled my spirit in that moment was the pathetic condition of a person under bondage to sin, for I observed her dreadful reaction when I spoke to her of the Lord Jesus Christ and mentioned kindly that I was praying for her even during that short time. Was her heightened vitriol at my words an evidence of demonic influence or possession?

It is not common or popular in modern Western society to speak of demonic possession. We tend to relegate a diagnosis of that nature to a short period of time in the first century, when the Lord Jesus and His apostles were on the scene to bring deliverance to Satan’s captives unable to deliver themselves.  And perhaps we allow for it in third world societies where modern medicine and psychology hasn’t trained men’s thoughts to avoid spiritual diagnoses or cures, and to look primarily for medical and scientific ones.

I pondered that poor woman’s words and actions for days, and I hoped for the opportunity to meet her again and speak a word to her of the kindness of God on subsequent morning walks along the river. I was not afforded that opportunity, but that did not prevent my prayers for her.

When the Lord Jesus cast out demons and released their pitiful victims from Satan’s bondage, I do not think we ever read that He did so at the request of the man, woman, or child who was possessed and enslaved by them. Either parents or others brought the demon-possessed to Jesus, or then they appeared before Him powerless to speak for themselves because the demons very evidently had full control of their tongues, so that with their mouths they spoke only the words of the terrified yet highly intelligent and powerful evil spirits (Luke 4:33-34, 41; 8:27-30).

What might this inability on the part of the enslaved individuals have to teach us?  In various other cases in which Jesus did miracles to display the almighty power of God triumphing over the effects of sin, the afflicted ones clearly expressed their desire for healing at His hand. Those physical afflictions healed by the Lord have their spiritual meanings, no doubt, and the power of the Spirit of God to make a blind man see can be used in the preaching of the gospel of God’s grace, for His grace and power can make the spiritually blind man see by faith.  But falling a willing prey to slavery under Satan’s power, as pictured in demon possession, renders a soul entirely unable to recover himself from that bondage, and further, there is no desire to be released from it.  Most certainly, those who had been delivered from demon possession were forever grateful for that deliverance, and we can see that in “Mary Magdalene, out of whom went seven devils” (Luke 8:2, 38).  But we can suppose that even she, like all of the others we are given account of, had either to be brought by others, or had to be chosen out for deliverance by the Lord Himself.

It is not a freedom of the will that causes people under the bondage of sin to cry out to God for mercy, and these have no inclination within themselves to bow the heart in humble faith to Christ. Paul writes in II Timothy 2:25-26 of the repentance that God must grant to a man in order that he might be released from the snare of the devil.  Such is the grip of the devil upon the souls of men, that it requires the almighty power of God to work a radical change in the soul while releasing it from its bondage.

The Lord Jesus spoke to the Jews in the eighth chapter of John’s gospel of their slavery to sin, which they denied indignantly. “Everyone that practices sin is the bondman of sin” (John 8:34, Darby trans.) is one of those fixed spiritual principles that so many either ignore or deny.  A man gets himself into the position of a slave by sinning according to his own will, and then is neither willing nor able to deliver himself from that bondage. In fact, in his natural state, he doesn’t even realize that he is a slave.

Jesus goes on to tell the Jews that “the bondman abides not in the house forever: the son abides forever”.  There is no dignity, no joy, and no permanence or security in being a slave, not only naturally speaking, but in the spiritual sense as well.  When the devil and his demons have had their way with their slaves, those poor souls are left ruined, helpless, and hopeless, bound for an eternity of misery.  It is only a son in a household that enjoys all the dignity and security and blessing that the father and master of the house can give, and it is this position of sonship that the Lord Jesus presents as a stark contrast to slavery in verse 35.

The Son of God then sums up the teaching on true freedom and the son’s place with these wonderful words:  “If therefore the Son shall set you free, ye shall be really free” (John 8:36).  His sovereign grace and power alone can set a sinner free from his bondage to sin, whether that bondage is evident as it was in the poor woman I encountered on the banks of the Santa Cruz River, or whether it is a socially less disturbing form of slavery to pride and self-will.  Neither the slave to sin, nor the dead in sin,¹ are inclined to improve their condition, but by the mighty word of the Son of God a soul is given eternal life and the true freedom to enjoy that life by faith.

3 thoughts on “If the Son Shall Make You Free”