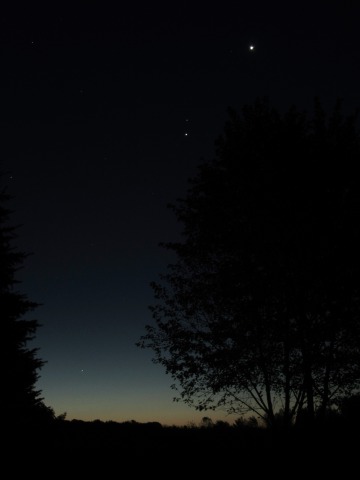 I do not spend much time stargazing, but I often have the privilege of enjoying a clear, starry sky in the early morning hour when light is creeping up over the horizon in the east. Recently I enjoyed such a scene in which I was able to capture in one frame the first five planets from the sun, with planet Earth in the foreground, of course.

When reference is made to “the morning star”, it is often the planet Venus that is being referred to, because for many months at a time the bright orb appears as a harbinger of the dawn.

As is the case with many other things in God’s wonderful creation, in both the terrestrial and the celestial realms, we find the demonstration of a spiritual principle in the morning star’s appearance while the sun remains hidden below the horizon.

In Revelation 22:16, we find one of the many beautiful names of the Lord Jesus Christ, “the bright and morning star”.  Jesus introduces Himself to us in this special and even mysterious way at the end of the very last book of the Bible after He promises to “come quickly”, and just before He closes the Scriptures by reiterating that promise so precious to the hearts of millions of believers: “Surely I come quickly.”

For it is especially to the heart that the Spirit of God speaks when we are first introduced to the morning star by the Apostle Peter.  Referring to the preview of the coming kingdom that he and the sons of Zebedee were given on the mount of transfiguration, Peter encourages his Christian brethren with these words: “We have the prophetic word made surer, to which ye do well taking heed . . . until the day dawn and the morning star arise in your hearts“.¹  Some have taken this as an allusion to the rapture of the church prior to the long-prophesied dawn of the millennial day of glory, when the Sun of Righteousness will rise with healing in His wings (Malachi 4:2).  I believe this is a lovely application of Peter’s words, but it is still preeminently to the heart that the Holy Spirit speaks by the underlined phrase above.  It seems that even the word order in that verse, which inverts the natural chronology of a morning star arising before the dawn, would indicate to us that the event of the Lord’s coming for us is not what is primarily in view here; the Lord Jesus desires that He Himself be the object of our hearts’ affections and gaze. When that is true of our hearts, then I suggest we are much better able to enjoy His final promise to us:  “Surely, I come quickly.”

Finally, I would just notice one more reference the Lord Himself makes to the morning star, in speaking to the overcomer in the church at Thyatira,² which represents an adulterous segment of Christendom soon to be judged by “great tribulation”. While they await judgment who are taught by that morally bankrupt “Jezebel” (the figurative embodiment of evil teaching), “he that overcomes” and is taught of God has for his portion the “Morning Star”, while he waits for, and watches by faith the approaching of, that great day of judgment and reward.³  What a wealth of comfort and hope may be found for our hearts in this enchanting figure of Him who is soon to come: “The Bright and Morning Star”!